The ‘Devil’ Really DOES Wear Prada The September Issue” – a documentary that presents a behind-the-scenes peek at the world of Vogue – premiered at the Modern Museum of Art yesterday in New York City. Some seem to believe that the film’s star, Anna Wintour, was the style highlight of the evening. Not so. I’ve never been a huge fan of her persona, but Wintour did display a bit of sense of humor by sporting a beautiful dress from Prada Resort 2010 to the event. You see – for those of you that have been living under a pop cultural rock – the infamous EIC was the inspiration for the icey but ultra-powerful Miranda Priestly of the best-selling book, then hit movie “The Devil Wears Prada.”

See some the the evening’s other well-dressed attendees in the gallery, then stay tuned for a trailer of the film below. 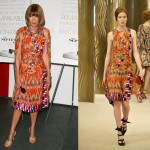