The Teen Choice Awards took place somewhere in LaLa land (or nearby) over the weekend and while I haven’t the slightest idea what the awards are and who won them (nor to I care to know), I certainly took pleasure in the red carpet viewing. Here are the Cult’s picks for best dressed, in no particular order.

Vanessa Hudgens is a Disney star just biding her time before she can break free from the tween role model shackles; you can see it in her eyes… or in her nude pics on the net. She is pretty consistently dressed well – on trend but with some edge. These violet tones look great on her permatan skin. Keke Palmer is staking a big claim in these risky disco duds. If you’re going to wear something outrageous, you’d better look damn good doing it, and she does. And she makes great choices for hair and makeup, letting those glitzy shoulder be the main attraction. At 16 it takes a lot not to simply fall in line and try to look pretty. She’s definitely one to watch. So Fergie clearly left her teen years long ago. Still, she’s more than holding her own amongst all the uber-green starlets. When you’ve got the goods, fashion is ageless. And those purple pumps are definitely on the ‘to do’ list! Selena Gomez is yet another rising star from the Disney mill. She pulls off the ubiquitous one shoulder look with an elegance not many teens could muster. Is it a coincidence that all the big teen stars are from Disney? I don’t think so (someone alert the conspiracy theorists!). I’ve never heard of Emma Roberts, but I like that bit of darkness in her eyes. I’ll remember her from now on and I hope a year from now she’s still a lovely brunette. Her powdery complexion definitely needs the dark locks to give her some dimension. And besides, as a blond this look would be allll wrong for her. And finally, Kristen Stewart. She’s usually the one on the carpet looking like either she’s had zero media training or she just doesn’t give a damn. After the incessant Twilight media blitz we know it isn’t the former. So her new hair and hardware-laden ‘fit are perfect to support the latter. She’s shaping up to be a rebel – who knows the cause. Let’s hope it’s just the look and she doesn’t end up strung out like so many young stars. See also the honorable mentions in the gallery below. 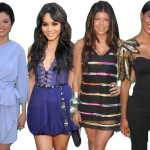