Sex vs. Style: A Tale of Two Knowles’ Solange and Beyonce Knowles were seen promoting Samantha Thavasa this weekend, and the resulting pics drummed up a topic we at the Cult examine with regularity: Sex vs. Style. It’s the ever present dichotomy of fashion, often separated by a line as thin as Kate Moss and androgynous as Tilda Swinton. Occasionally, however, the line is very distinct. Case in point: the Knowles sisters. Don’t let the Bedroom Eyes Fool You
Beyonce’s look in these press pics maybe seem sweet juxtapose Solange’s sexpot stare. But don’t be fooled! Under that sugar coat is slathered a thick layer of sex lube. When it comes to music, big sis far outpaces her younger sister. Beyonce has about a decade longer in the business and an arguably greater gift for performance, but it’s her status as a sex symbol that has propelled her from plain ol’ popstar to ubermega-superdiva-icon. For better or worse, that’s what the pop world wants

Second Star Syndrome
On the other hand Solange, who had the rough task of making a name for herself while in her sisters vast and ever-expanding… shadow. Not unlike many second sisters (see Ashley Simpson and Hayley Duff), Solange used her look to stake her claim to fame. She’s rebelled something serious! She’s always taking fashion risks and has even thwarted the pop/r&b notion that straight and long is a must (hair). It’s worth mentioning, too, that Solange’s narrower figure is more conducive to the style end of the dichotomy. For better or worse, that’s what the fashion world wants. 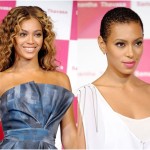 One Response to “Sex vs. Style: A Tale of Two Knowles’”