Block joined Fairchild Publications in the Fifties and worked there until the fashion illustration department was disbanded in 1992. Through it all, he swiftly yet fastidiously captured an array of subjects with a cool and detached manner, jetting to Europe for the couture shows or sauntering just up the street to sketch unsuspecting notables at lunch. All the while, he fulfilled what he once described as a childhood quest “to draw glamorous women in beautiful clothes.”

… or Block, the end result was never just a matter of lines on a page. The way he saw it, “Gesture is everything in fashion,” he said.

Read the full obituary at WWD.com 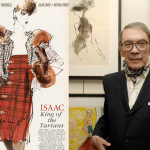