Hmm… Vogue covers have been rather plain lately. Just look at the Vogue Russia April cover in the upper right corner. Despite two beautiful people (Carmen Kass and Lenny Kravitz) the cover is total drab. It’s the “music” issue, but I don’t think that excuses it from having a stylish cover. Penelope’s Vogue Espana is easily the best of these. Maybe Vogue could use my help styling a few covers

The photos that appear on this inside of these issues fare better in some cases. Like the “Dresses of time” from Vogue China. Photographed by Daniel Jackson, styled by Joanna Schlenzka and modeled by Liu Wen. 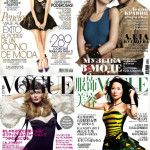 Previous post
Let’s Play a Game: Find the Asian Needle in the White Model Haystack
Next post
Cindy Crawford is a Carb Hater

2 Responses to “VOGUE Around the World: Spring Covers Fall Flat”